You are here: Home / Food Marketing / The Farmery – is this the supermarket of the future? 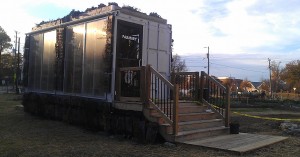 I was thrilled to learn recently that a prototype of  the Farmery! was coming our way here in Raleigh, NC. Developed by a team that consists of Ben Greene, an artist and industrial designer and Tyler Nethers, a grower and biological systems developer. The mission  of the Farmery is “reinvisioning local food” and their goal is to create urban farms, a supermarket for the future made out of low cost shipping containers and some modular greenhouse components.

There is so much to like about this model if you’re a fan of local food and sustainable food production! The company has a mini-farmery in operation in Durham where crops are grown and then sold along other locally-sourced products. Customers can “harvest” their own food – how cool is that? The building in Raleigh is a small container which will grow crops on the outside walls and roof. I took this photo soon after they arrived on the grounds of the Raleigh City farm downtown, and of course, there’s nothing growing yet, but you can view the Durham location to get an idea of what it will look like when it’s fully functional.

The Farmery also has a couple of production prototype growing units where they’re working on refining their model to achieve optimum efficiency and systems that can be profitable. They’re producing gourmet mushrooms inside one of the shipping containers, with vegetables and herbs growing on the outside via a vertical wall system. So far their focus is strawberries, greens, lettuces, and salad mixes. Oh yes, and they’re also growing fish!

What’s really exciting is their vision for the future of a full-fledged supermarket consisting of a cafe, the farm itself, and the grocery. The second floor consists of the farm; customers will be able to actually see their food growing on the vertical walls and you have the option to harvest it yourself.  Customers will be able to connect with their food in a way that is much more intimate than buying a cellophane-wrapped product. And of course, you can’t get much more local than walking down the street to your neighbhood Farmery and snipping some herbs for dinner!

They also sell living wall planters on the website, for the home or office. The base size is 20″ tall by 10″ wide and 3″ deep, and you can use them as a solo installation or put several together – inside or out!  No loose soil and water is self-contained.