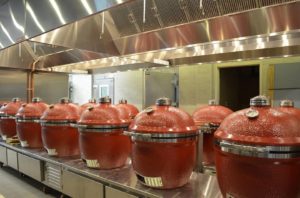 I had the opportunity to attend a cooking demo at Kamado Grille recently here in my hometown of Raleigh, NC. Kamado Grille is a restaurant concept that relies on the Japanese-inspired kamado grills to cook nearly all its food – really! They have a  kitchen with 2 rows of grills – one row cooks low and slow – like prime rib, for example; the other row is high heat for quick sears.

It was the Chef Eric Gephart, Chief Culinary Officer of Kamado Grille, who led our Saturday morning demo. He was very entertaining and knowledgeable as he walked us through the preparation of some marinated chicken hindquarters. And even with his very impressive resume, Chef Gephart was very accessible, welcoming, and answered all our questions – even after the demo, when he probably needed to be overseeing lunch prep!

So although I was there as a grill-master wannabe, but I couldn’t help but notice how Chef Gephart’s stories really worked in this setting. Here’s a good example: In giving us the recipe for the BBQ sauce, which he got from his father-in-law, he remembered the first time he heard the recipe, which includes Lipton Onion Soup mix.

Yes, the mix in the box. For a professional chef, this is not something he would usually consider as a good ingredient. He shook his head the first time he tried the recipe, but the sauce turned out great, so… yes, Lipton Onion Soup mix it is.

So not taking yourself too seriously is always a way to connect with others!

And he was so enthusiastic during every part of the demo – talking about the chicken and why the thighs and legs are more flavorful on the grill. Leaving the skin also makes it more moist so if you want to remove the skin to lessen the fat content, his suggestion was to cook it with skin on and remove it before eating. Or take the skin and make some chicken cracklin’skin – yum!

The grills can be monitored remotely – yes, there’s an app for that – so that Chef Gephart can keep an eye on the temperatures 24/7. We got to take a brief tour through the kitchen to see the grills, and he introduced us to some of the workers in the kitchen – and he told us a story about this person who was prepping a salad, this one who was grilling burgers, etc.

Now I suspect Chef Gephart is enthusiastic about all things grilled, but he was really excited by some of the questions from the audience and indicated that he might be learning a few new tricks himself! And the chef demonstrated authenticity in describing the processes. When things didn’t go quite as he planned, he told us, and then picked a new path. So chicken hindquarters became pulled chicken when more people showed up for the demo than were expected!