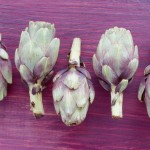 For many small food businesses, the challenge in marketing – and especially social media marketing – is in not knowing what to say. What can I share, they think, that could be interesting about what I do. So I thought I’d give you an example of how you can take something simple and turn it into something shareable.

I chose an artichoke because it’s a quirky kind of vegetable. Not everyone is familiar with artichokes and most people who do know them only know them as canned artichoke hearts thrown into a dip. But the artichoke is so much more! Here’s an example of some questions that might be interesting facts to share with your audience.

The point is, even if you think you have nothing to write about, you probably do. It may be a matter of shifting your viewpoint and thinking outside the proverbial box. It’s so important to remember that the knowledge that you have is not shared by everyone. And the people who are interested in what you know may also be interested in your product or service, too.

What you’re doing is putting yourself out there a bit, letting people get to know your personality and feel a connection with you. This is the real goal of social media for business –a way to build a relationship with a potential customer, client, or partner.

Use this post to spark your own ideas about some aspect of your business – and hey, if you’ve got a new way to prepare an artichoke, leave a comment!